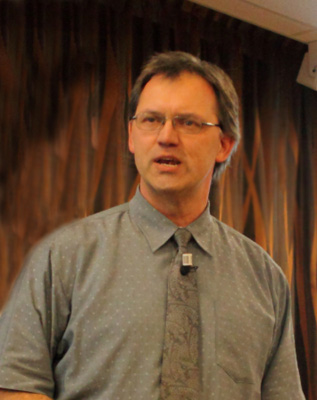 Herman Schoo is the Program manager in the Holst Centre of the strategic program “Sensor Tags & Systems” where combinations of organic, large area electronic device technology is investigated. He was recently appointed as Senior Research Fellow of TNO.

1992-1999: From february 1992 involved as a polymer chemist in several multidisciplinary projects at the Philips Research Laboratories. These included the development of polycarbonates that do not show stress-induced birefringence, the synthesis of (block) copolymers that can be used in the steric stabilization of water-based colloidal suspensions of (for instance) metal oxides, and the development of (semi-)conducting polymers. Developed PPV materials that were later commercialized by Covion (now Merck). Was involved in setup of PolyLED Business Unit at Philips, resulting in a pilot production unit in Heerlen, being the first commercial producer of polymer light emitting diodes.

1999-2005: From February 1999 at TNO Industrial Technology and as research fellow of the Dutch Polymer Institute to set up a group, working on semi-conducting polymers and devices. This encompassed Organic LEDs, Transistors, Solar Cells and Sensors based on organic devices, involving around 20 researchers. Involved as Chief Technology Officer in a startup-company, “Orgatronics”, aiming at pre-production support and pilot production of organic electronic device applications. Member of the Scientific Advisory Board of the Plastic Electronics Conference. Lecturer in a number of Top Technology Courses on polymer Electronics. Co-organizer of the International Conference on Organic Electronics. Involved in setup of the Holst Centre at the Eindhoven High Tech Campus. Currently, this is one of the leading institutes in the field of Organic and Large Area Device Technology