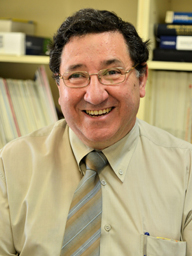 Prof. Dr. Ing. José L. Ocaña is Ms: (1979) and PhD. (1982) in Industrial Engineering (Mechanical, Energy and Materials) at the Polytechnical University of Madrid (Spain). He started his research at the Institute of Nuclear Fusion of this University, where he developed active research on the analysis of Laser and Ion driven ICF targets. In 1989 he entered the group of Spanish scientists promoting the development of Laser Technology at national level, starting to promote the setup of several high power laser facilities finally ending with the UPM Laser Centre in Madrid (Spain). He has developed scientific collaborations and stages in the most relevant worldwide experimental laser facilities, including Kernforschungszentrum Karlsruhe (Germany), P.N. Lebedev Physical Institute (Russia), Lawrence Livermore National Laboratory (USA), ISLT TU Wien (Austria) and others. He is Director of UPM Laser Centre since 1999. He has been an active participant in national (Spain) and European RTDI initiatives, leading projects in the field of scientific and industrial applications of high power lasers, especially in the sub-fields of laser plasma interaction, laser surface treatments, laser ablation and laser micro manufacturing. He is author/co-author of numerous papers in national and international journals and conferences. He is member of different specialized committees, associations and networks, former chair of EUREKA EULASNET II network on Laser Technology and Applications, member of the Executive Board of the European Laser Institute and, most recently, member of the International Committee of 2nd and 3rd Int. Conf. on Laser Peening and Related Phenomena (San Francisco, USA, April 2010 and Osaka, Japan, October 2011) and Co-Chairman of the 4th International Conference on Laser Peening and Related Phenomena (Madrid, Spain, May 2013).